It is an art form
continuing to live with your whole heart.
It can be expensive...costs mount
skeletons dangle in the closet
in clothing you have never seen before.
From under the creaking floorboards,
past pyramids of burning black-pitched hay,
legacies drag and slither
into legend.

November comes too soon,
the second chance for souls, all of them,
none neglected
in the mad dash to flee this place,
following like ants on the trail of the saints
who left a moment before,
a naked moment,
brief, sleepy, and no more than that.

Haunting hearth tales
words and whispers in licorice-spiked fogs of breath
told to little girls
who grasp the green innards of the stripped twig
who watch the moon,
passing up opportunities for more in favor of better
and wait for the eye to close,
when they shall fly,
whole-heartedly.

It's been a while since I let you in on my freaky little world. No full moon stories lately, no ravens...I don't eat McDonald's much anymore, so that's out as a topic.

Stupid broken foot caused far more trouble than I would ever have imagined. And, I wish more than anything I could see Eva and James. My life is far the worse for not being near them...

So, I have this weird thing about trash. I try to create as little trash as possible. Americans are shocking trash whores. I recycle all cans, bottles, and paper boxes from food. I have to take them to the dump and recycling myself where I live, or I would pay too much for a  pickup service I get free with my taxes. Reid and I produce one bag of trash a week...and not even a big one. That being said, I think I have a strange habit that would make you snicker at how strange and slightly obsessive some people are. Allow me to illustrate... 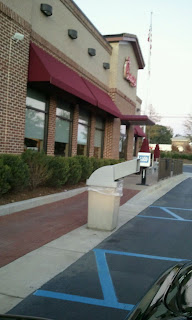 Really weird, huh? I have these thoughts from places I have worked, like Target, Borders, Macy's, etc. I am aware that people in general abuse retailers and try to throw away all sorts of stuff in the dumpsters.

I've decided it is okay to throw random car trash away in the trash cans at gas stations and convenience stores. Fast food, stuff from your trunk, paperwork, mail....all ok because that's why they put those trash cans between each gas pump. Getting gas doesn't generate trash, but they are always conveniently present, so I assume they view it as a cost of business to dispose of RCT. Random Car Trash. 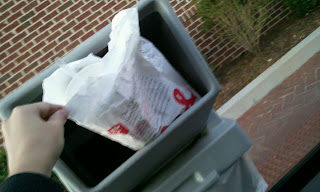 The resulting behavior from this thought process of mine is that if I have refuse from a particular take-out place, or store, and I think I might be passing by there soon...I will take the trash back to the establishment from whence it came. Thus my Sunday afternoon delivery of Chick Fil A trash.

If you ever find yourself asking what sorts of weird things people do that you would never guess....think of me!     Hugs, Sylace

Peace comes in the middle of the night.
My hair is down,
I download silence like an app.
No one looks for me.
The light is on and I am up,
I have the biggest thoughts,
Realer than dreams.
I can write here as if my fingertips were keys themselves-
Colored tips, lettered gems.
Nothing to hold me here at all, and
Therefore,
I am gone.
Where no one could find me in all the lifetimes left, unless
They knew me so well that
My hands became theirs.

What You Don't Understand

What you don't understand,
is that the fight in me
kept me alive time and time again,
when literally a gun was to my head,
when I did not know if I would see morning,
when my body was no longer my own.

If you had a dog, pretty and sweet-natured,
but she had been kicked...
savagely, repeatedly,
until she foamed in fear at the sight of a boot,
and if you loved the dog,
you would forever take your shoes off,
and you would never allow
a boot near her again.
Posted by Sylace at 10/15/2011 12:19:00 AM 1 comment: Links to this post

The Lie of Things

White lies
have ease and elegance,
simple serviceability,
just a papercut-
pop it in your mouth and suck on it,
it's gone,
melted as the sugar it was made of,
fleeting, and sweet.

Black lies
make a soup of human bones,
with no survivors.
The razor went in *here*,
the body landed *there*.
Everyone who tracked through the scene
has an inevitable tar
tracking after them, under their shoes,
poison steps across a winter meadow
that crackles with blood that was.
Posted by Sylace at 10/10/2011 01:35:00 PM No comments: Links to this post

resting on a cracker pregnant with divine significance,
she lays her head askew.
to the right, a pile of lace veils too worn to serve any purpose
to the left, a hank of rope, a striking snake of green hemp,
too many clocks ticking to sleep,
too many hearts beating.

grey mice, brown mice, climbing over the wall by the hundreds.
They look so soft; they are so eager,
with pleasing teeth they show their tiny hands to her as
she nods at each in turn, they have washed,
they have earned the favor,
and she breaks off bits of her bed
to feed them.
Posted by Sylace at 10/10/2011 01:27:00 AM 1 comment: Links to this post