At War in America

I just realized that my oldest son was born during the end of the Gulf War, "Desert Shield." I got pregnant some time in there obviously, and Guy's Dad was deployed in the aftermath during part of my pregnancy. Guy was born into a nation at war again, and which we have never stopped pursuing since then, in whatever guise we hawk it to the world. Under whatever invisibility cloak of "terrorism" it is thrust upon us. It doesn't matter what you believe after a while. You just have to come to see that it's all part of some big orchestration on a global scale in which you can neither see the conductor nor the instruments; all you can hear is the music- whether you perceive it as rancorous or sublime to your ears.

Reid and Guy, my sons, have never known a world where America was not "at war" or deployed in heavy actions somewhere. Now all I hear on the radio from both sides of the media (as if there is anything but one side for the media which is the side of sensationalism and obfuscation) is how the Federal government's move to cut militarization of local police forces by limiting "surplus" military supplies and weapons provided to local forces is going to COST TAXPAYERS!! to "properly" arm our police and sheriffs.

I rarely get political. There doesn't seem to be any benefit and all it brings is hopelessness and haters to the forefront. I vote. I practice politics as an ethical, responsible citizen. But as part of my profession, Registered Nurse, I have to stay out of most fights. Love all, Serve all- as the Hard Rock Motto goes.

This time though, I just want to vomit. POLICE FORCES DO NOT NEED military grade weapons, helicopters, armor, etc etc etc. This escalation will never end. I see no end.
My son is in the military. I was a military wife long ago. My sister died in the military. Some of the most important people in the world to me are serving. I support the military.

I do not support any city or state police force belief that they need these armaments against the American people. I do not support taxation to arm our police against us. I would rather be gunned down in the street by a "criminal" than give up my freedom to feel that my police force is not my enemy. Yes, the police must be armed in appropriate, non-militarized fashion. Duh. And if you think crimes upon my person have not been committed, and I don't understand as a victim of crime, you would be terribly wrong. I have been victimized by criminals several times in shocking fashion.

I am a normal mom professional female and I can attest to you that even 24 years ago I was assaulted by a police officer giving me a ticket. He actually hit me, and he got a way with it, even though my then military husband and I registered complaints and tried to pursue the issue. I have had great friends who are police. I still cannot support the militarization of our police forces. I have to stand up against what even the FEDERAL government can actually see needs to stop. I have never owned a gun, but in two weeks I am taking training classes and MJL is buying me a weapon that I will be properly trained to use. I will protect myself, I hope, and I respect what police do and what they sacrifice. But I do not give them leave to beat people to death in my name.

So here's my poem of thoughts. A bit on the preachy side and overly rhyming, but I like it anyway.

At War in America
Wrapped in a cloak of chagrin and champagne,
a whirl and a whisper
a brief mist of fame,
old sins, new wine, just to hide what is plain.

There is no grief too deep
Nor too wide for the slain.

Watch your flanks, guard your rear,
You're long dead if you're caught.

When the price gets too steep,
For the bullets we rain,
Will we crumble in tears-
Or revere- what we wrought.

I don't know if you all have heard of George Ezra yet. I hadn't till I saw him on Saturday Night Live a few weeks ago. Well actually, I had heard the name, but had never heard him sing. I thought his performance of his song Budapest was so unusual and captivating, even though I could not exactly understand some of the words.

They started playing the song on local Atlanta radio lately and I finally figured out the words I could not get..."I'd leave it all." And then once you understand them, it's like you can't see why you couldn't before- except to say that his English accent is so different than anything I am familiar with. I think this young man is tremendously talented and I will be following his career and music.

I have some incredible memories of Budapest, and of thinking it was really the one place besides Berlin that I could see myself living in Europe- of the places I have been. I find it hard, for all my ability to describe things, to convey the sense of being truly unseen in that city. I explored on my own while Mike took a nap, until later in the evening when we went out together. It had been a long, adventure packed ten days already. As I was wandering, no one looked at me- no one appraised me and no one was "people watching," really. The residents of Pest seemed to simply mind their own business with a focus I never encountered before in Europe. I have to believe this is the result of thousands of years of Hungarian history, being conquered and subject to centuries of oppression- only the latest being the former communist regime.

All I can tell you is that I have never felt so deliciously invisible in my life.

Once I woke Mike up and dragged him out for some nightlife, and way too much strudel and shopping into the wee dark hours, the city took on a more usual bustle and joviality. The food vendors were jolly and the huge Christmas trees came to life with lights and all the shadows and sadness were dispelled.

I think that's it- Pest that day was like a ghost town full of walking ghosts going about their business. I was just passing through like thousands of years of invaders. Just a new kind of invader, with a bunch of Euros and shopping bags.

Either way, I really like George Ezra's song Budapest, which he wrote after missing his train connection and never actually making it to Budapest.
I'm not sure I ever made it to Budapest. Maybe no one does unless they are born into it, for so much is hidden- you can just feel it. People come and people go, and the Hungarians just keep going on with their lives. I certainly tried my best to get off the path of others and make my own.

while you slept on the river
I, alone, roamed the city
a thrift sale of garments
and music
and strudel

unseen and unknown
just another white woman
examining signs to
lose myself deeper
down the flat, narrow streets
of Pest.

your dreams were all torn, all
tossed up and muddled,
and dreams I was gone,
you were lost back in time.

My feet found the cafes, apples, sausage
with coffee, people
laughter, snowflakes-
two people just freezing
a moment for memory-
those days on the Danube,
Budapest. 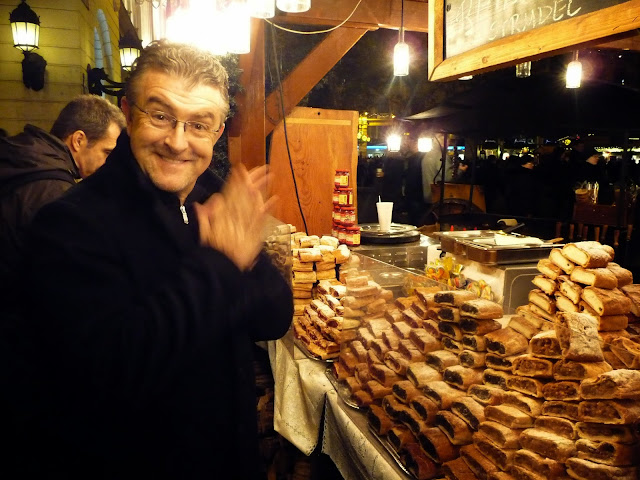 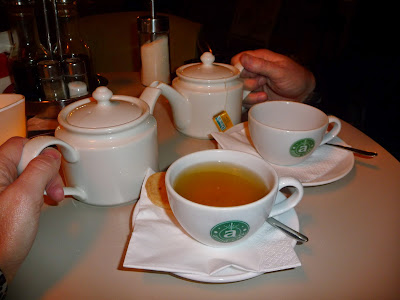 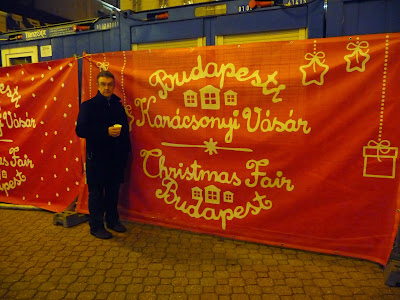 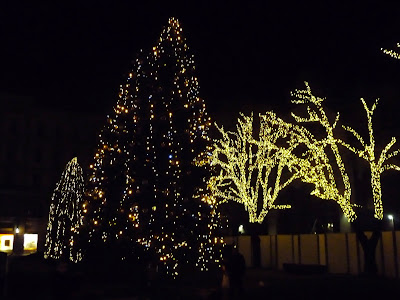 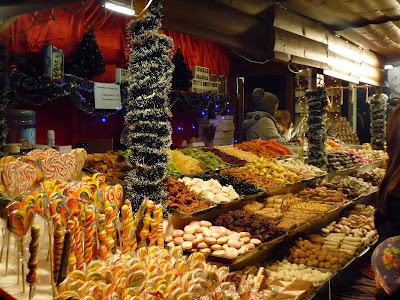 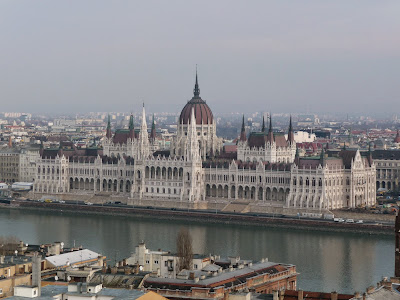 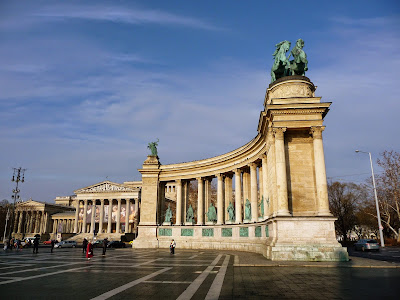 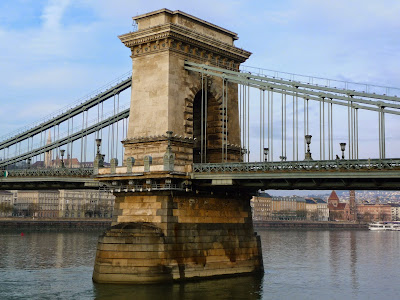 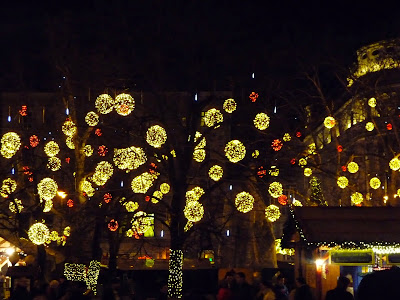 Beasts of desperation
assaulted her in her lilac dress,
she may have worn it to just once feel pretty
she may have worn it because she had no other,
or in hopes of sharpening her skills at tragic avoidance,
but his words came at her either way,
carrying freight and fury,
things held in too long or stories made up entirely,
from a man who never intended to love her
in the first place.

Lovely and sad and beaten down,
she ate her dinner anyway,
maybe the hunger of anger consumed her,
maybe the ages of missing were over,
with freedom displayed on her plate,
but he would buy her this last meal,
while she meditated on Ephesians 5:25,
and he broke the bread with her
for all time.

Pictures are proof that memories happened,
I am in love with this picture of you.
I have so little faith in myself sometimes,
that everything must be captured.
Bubbles of fear in golden champagne
ants in the graveyard pocketing breadcrumbs,
cherries awash the ground, laden the trees.
I am so fearful I will not remember,
or worse, that I am not real at all,
nothing more than evaporating pixels
in a wasteland of selfies.
There must be more to recall than
this is where I was, this is what I wore,
this is what I ate, who I loved, who I miss-
who was there when I was present,
proof it happened,
proof of life.
Posted by Sylace at 5/04/2015 03:33:00 AM No comments: Links to this post


Smash the pots, then stomp the flowers- a dozen
tired and tawdry hours, in tens of lots,
all mine,
all ours.

Drink it eat it, grow in size, one man's
detritus burdens flies, a fly's conceit
over man's demise.

In better times, when love was fire,
I held the reins, I leapt the mire.
Cold was cold; it could be felt,
but had no sting, and left no welt.

So western now, so lost and loose,
my heart and mind have called a truce.
The cold is cold, the wind like ice,
All fools get taken- once or twice,
and need be shown their own device,

For friends who help remind me of things to be done, and for Eva especially and forever.
It's a full moon, and I have cats. ;-)

It's only the door
and the sea
and the shadows

Smell or no smell, heart or no heart,
runes that read- cross the ocean
bones that say- gamble not, gamble not.

Time and her sceptre
bask in this age of loss.
Humanity spinning-
Mortal, Immortal- immaterial and
all
of a piece together.

What would be asked of the oracle
if even a question were prompted-
For in this she stands always at ready,
Bathing in tales of the crises,
with fortune for those who will come.