Some of my favorite stories are the Russian Fairy Tales. In essence, they aren't terribly different than those of Hans Christian Anderson, or the Brothers Grimm. Instructional, moralistic, with strange and fantastical elements like the dog with eyes as big as towers, from "the Tinderbox," an all time favorite...

I've also always loved "The Firebird," possibly the most famous of the Russian tales. It has been made into operas, ballets, symphonies and plays. The stunning Firebird with the flashing crystal eyes and the magical golden feathers- elusive and coveted, and the dashing and brave Tsarovich Ivan, who makes the disastrous, epic, and yet ultimately triumphant journey to bring back the Firebird, the Golden Maned Horse, and the beautiful princess. I just reread it a few minutes ago.

I've always seen parallels between Odysseus and Tsarovich Ivan- pride, hubris, mistake after mistake, long journeys and wandering, the need to complete one task after another, and the benevolent protectorship of the grey wolf much in the vein of the Goddess Athena with Odysseus.

Somehow, I just never noticed before, until just now, how terribly insignificant the Firebird was all along to the story. She is a pawn, kept in a golden cage, literally. She rates the title and little more. Really the story is of Tsarovich Ivan, who ends up diced into pieces by his treacherous brothers, only to be re-animated by the cunning machinations of the grey wolf, and returned to his father's kingdom just in time to right all wrongs. And somehow, our little firebird never really mattered at all. 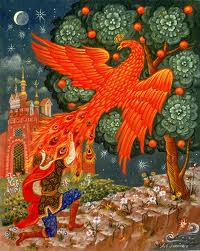 both like and unlike Icarus,
both falling and not falling,
melting and not melting,
soaring and sinking completely unseen,
not part of the outcome at all,
for Prince Ivan.